The General Union of Palestinian Students at San Francisco State University have never denounced or distanced themselves from  the genocidal ranting of their president, Mohammad Hammad.  They have attempted to keep a low profile on campus, and according to some sources, postponed a bid at a Divestment referendum until Mohammad's threats were a distant memory.   Yet faced with Jewish students in joyous celebration , the lack of self control that characterized GUPS over the years was out in full force. Until there are consequences for the General Union of Palestinian students- until they are called out and disciplined for their misbehavior- how can we expect San Francisco State to provide a safe campus climate for Jewish students?

From the director Of SFSU Hillel, Alon Shalev 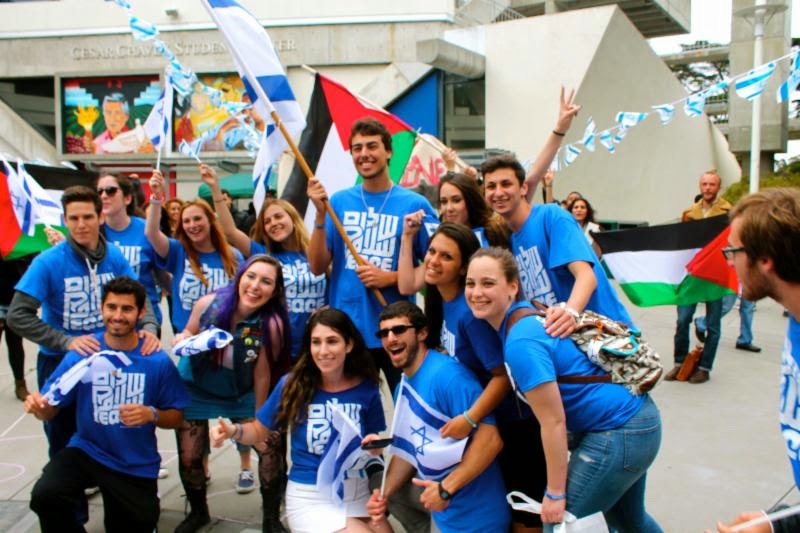 As you might have heard, last week we had a tough Yom Ha'atzmaut at SF State. On Tuesday,the General Union of Palestinians Students held a rally for Naqba (Disaster) Day urging students to come and disrupt our Israel Independence Day. Then on Thursday we held our celebrations.

The first two hours were great: we hosted a shuk (Israeli Market with food,spices, games, and give-aways) and a live performance from local band Sol Tevel. Hundreds stopped to sample the bourekas, rugelach and bamba, pick up information, and dance to Israeli music.

During the final hour, a large group of pro-Palestinians entered the campus quad and held a counter-rally. They were extremely vocal and their chants extreme. As hundreds gathered to watch the spectacle, it became very tense.

Our students were amazing. They continued their singing and dancing throughout. However, many told us afterward about how intimidating it had been. A few left in tears. Ironically, at the end, several discussions broke out between our students and pro-Palestinians. They were hard conversations, but conducted with civility.

On Friday, we invited students to come before our Yom Ha'atzmaut Shabbat to discuss what happened. Usually, a dozen students attend the pre-Shabbat conversations, but this time over 40 students attended. I heard many talk of intimidation and disappointment, but also determination to continue and share the beauty of Israel and all its achievements.

Our JAFI Israel Fellow, Sima Toledano, facilitated the conversation and did an amazing job. She also phoned every student she could remember was on the Quad to see if they were okay.

After Shabbat service, we partied and ate schnitzel. The house was packed with students setting up tables outside, downstairs and even in the garage! This was the opportunity they were denied on Thursday - the chance to celebrate, to retell stories of their experiences in Israel. Many of this year's Birthright students, who leave in two weeks for Israel, attended both on the Quad and at the Hillel House, and were swept up in the moment.Alon concludes:


....this week also highlighted why Jewish students need a safe space to be Jewish and explore their relationship with Israel.