Israel haters groups response to anti-Semitism at SFSU "But we're the victims".

Not being able to control the narrative is a first for the haters.  How are they handling the stress?

What is the reaction of, oh, lets say Jewish Voice for Peace to this? After all, their mission statement claims they oppose "anti-Jewish, bigotry and oppression".

Ben Lorber, a JVP staffer has "talking points" to share and can help you write a letter, denying anti-Jewish bigotry and oppression even exists 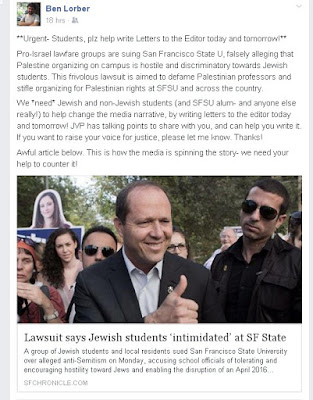 Other anti-Israel groups are also mobilizing fast as they can, utilizing their perpetual theme of  " But, but, but we're the victims" ( so send us money).

A "Launch good" page has been set up to raise money for  SFSU  Professor Rabab Abdulhadi and her students.

They disagreed with her work on Palestine, so they plastered posters across campus calling her a terrorist and a Jew-hater.

Professor Rabab Abdulhadi of the Arab Muslim and Ethnicities and Diasporas Studies program has filed several grievances against San Francisco State University for the hostile and unsafe work and study environment for Palestinians, Muslims and Arabs on campus. Your generous donation will contribute to the legal defense fund against Islamophobia, anti-Arab discrimination and hostility to Palestinians at SFSU campus and to supporting the AMED Studies program against destruction.

"They" apparently means pro-Israel groups such as David Horowitz, Canary Mission, AMCHA, Campus Watch, Stand With US, Simon Wiesenthal Center, Middle East Forum and the Zionist Organization of America -any group that dares defends the rights of Jewish students on campus.

In the eternal sunshine of their spotless victimhood, apparently  the appearance of several dozen tasteless posters on campus constitutes "intimidation" for the General Union of Palestinian students at SFSU. However, there is no evidence that any group other than the Horowitz center was involved, and Jewish SFSU faculty and student groups on campus immediately denounced the posters.

The General Union of Palestinian Students has rather tender sensibilities for a group that routinely shouts down any dissenting voice, calls for genocide, and maintains a truth-optional view of history.