By Tuesday November 19, the super hero of pro-Israel blogging, Elder of Ziyon had written about the story, adding a photo of the offensive stencil

At San Francisco State University, the General Union of Palestine Students recently held a celebration of Edward Said, where they have a mural honoring him.

At the event, according to AMCHA, the GUPS students set up tables with stencils for making posters with images of known terrorists as well as with the words “MY HEROES HAVE ALWAYS KILLED COLONIZERS,” which students displayed in the campus square. 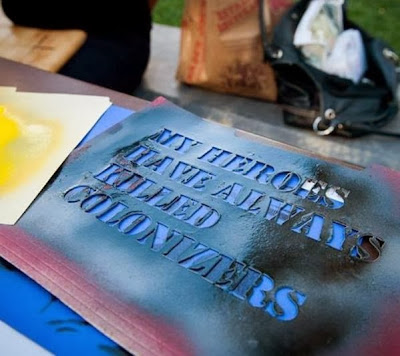 Yes, to SFSU, it is acceptable for Palestinian Arabs to call for the murder of Jews who live in Israel. Free speech, right?

The event was covered by the SFSU newspaper, but they didn't mention the hate posters. The comments do, though.

One fan of GUPS put the photo above on Indymedia, with the ironic subhead "Rejecting normalization is not incitement to violence." Well, this is.