GUPS issues a petition instead of an apology

In response to documentation of their threats, intimidation and glorification of violence, the General Union of Palestinian Students  shrilly claimed victim hood in this petition to SFSU President Wong.
They have conveniently neglected the actual facts of the incident, instead extolling their "integrity" and their "principled position".  With a moral inversion that would shame Orwell, those that have threatened now  "fear for their own safety"

As of Dec.4, there are only 2 organizations endorsing this petition.

Dear President Wong,
We are writing in response to the email sent to you and others by Tammi Benjamin, AMCHA initiative. We are appalled at this blatant attack against the integrity and principled position that GUPS AMED has maintained throughout their history. We are horrified by the baseless attack and allegations of anti-Semitism that have been leveled against GUPS, AMED, and the Cesar Chavez Student Center, the organizers of the 6th annual anniversary of the Palestinian Cultural Mural honoring the late Professor Edward Said.
We are proud to continue the rich legacy of justice-centered student activism at SFSU. GUPS has historically stood for justice in/for Palestine and has linked our struggle with that of all people’s struggles for self-determination, justice and peace.
We are concerned over our own safety and the safety of our friends, allies, and all those standing in solidarity with our movement, especially when their photos and names have been posted online as if to make them a moving target for violence.
This belligerent smear campaign meant to slander the Palestinian movement on campus has directly created a hostile environment that makes it impossible for us to express our views and exercise our academic freedom.
We call upon you, President Wong, to:

There may be a bit of "petition padding" going on as well.  Kinneret Israel has signed twice, as both a Berkeley and as a San Francisco resident.  There may be other incidents of duplicate signatures, or fake names. it hardly matters, since the very foundation of the petition is crumbling beneath the weight of its own lies. 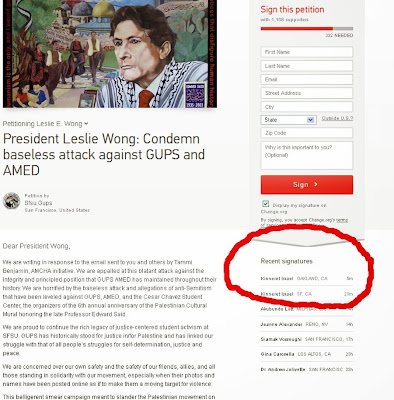